Revoking the IFR World Winner title ... a follow up. 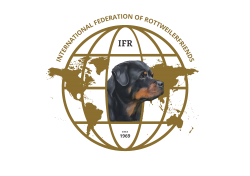 Seen some commotion concerning the fact that the IFR-title "World Winner 2022" was withdrawn for the male dog that at first obtained it, we clarify the following.

To contradict false rumors on social media : such doping-control was not organized for the first time at the IFR-show but is organized at other shows too.       By registering their dog(s) for the show, all participants were aware  of - and accepted - the application of ENCI's regulations and the possibility of such doping-control.

The male Negro Saetta Negri Rott was named best male (and Best of Breed).  Based on this show result and having passed the IFR utility dog test, the dog also obtained the IFR title of World Winner 2022.

We were afterwards, by letter of 05 July 2022 (addressed to the IFR and SIR with a copy to the FCI), informed by the Italian Kennel Club ENCI that the "qualification obtained by the dog" is revoked.

Unless ENCI would contradict us in this, the taking away of a qualification can only be understood as a disqualification and/or the revoking of the showresults.

To avoid and/or stop all rumors, we repeat that this decision was not based on the establishment of doping and we add that the owner and handler of the dog did not refuse the test but have accepted the procedures, incl. that a blood sample would be taken.

The Italian Kennel Club ENCI refered to "the impossibility of carrying out the sampling of biological material for anti-doping control on the dog ... due to the dog's aggressive behavior."

I quote so there can be no misunderstanding about this (the letter was sent to us in Italian and English so the translation is not ours) :

We refer to what happened on 8 May 2022 on the occasion of the Rottweiler World Championship held in Crevalcore (BO), organized by the International Federation of Rottweilerfriends (IFR), regarding the impossibility of carrying out the sampling of biological material for anti-doping control on the dog NEGRO SAETTA ROTT - JR78874RW owned by Mr. ..., due to the dog's aggressive behavior.

We inform you that the Board of Directors of the ENCI in the meeting of 10 June 2022, upon compliant proposal of the Anti-Doping Commission which met on 1 June 2022, has deliberated to revoke the qualification obtained by the dog in the club show granted to the Società Italiana Rottweiler (SIR) as part of the aforementioned event.

This is so that the associations in address can take any consequent decisions on the matter.

The IFR-board applauds the organization of doping-tests but did not order nor organize this doping-control nor did it have a say or hand in its procedures.   The Board did not witness the course of the test (we did receive contradictory testimonials) and it takes no position concerning its organization, its course and/or the findings and/or conclusions of the veterinarians that were assigned for it and/or the subsequent decision by the Italian Kennel Club ENCI.

However, as long as the decision of the Italian Kennel Club (an FCI- affiliated Kennel Club) stands, it must and will be respected by the IFR (a cooperation partner of the FCI).

As the IFR World Winner title is inextricably linked to an obtained show result, as long as this result is revoked, the title of IFR World Winner 2022 is objectively and automatically but also necessarily withdrawn.